How many species of elephants are there?

Until very recently it was thought that there were only two species of elephants - the Asian elephant Elephas maximus and the African elephant Loxodonta africana. There are several subspecies of each of these, including what was, until recently, thought to be a subspecies of the African elephant, Central Africa's forest elephant Loxodonta africana cyclotis. But genetic research now suggests that the forest elephant of central Africa is actually a third species, genetically distinct from the others (read more here), although the boundaries of the ranges between African savannah elephants and forest elephants are still unclear. So in fact there are probably three species of elephants, all of them unique.

The African elephant population is doing better than it was twenty years ago when the international ivory ban was introduced in 1989, but it is now much lower than it once was.  Some say there were millions of elephants in Africa at the start of the twentieth century.  Since 2006, however, there have been worrying trends in Africa, with poaching of elephants for their ivory again on the rise, driven by new markets in Asia and the USA (read more here).  Poaching has not been this severe in decades and long-time elephant conservationists like Iain Douglas-Hamilton and Daphne Sheldrick are rightly calling it a crisis.

Central and western Africa have been hardest hit, the home of the unique, little known forest elephants, and slaughters of masses of elephants are happening in places like Cameroon and the Central African Republic, but elephant poaching is also increasing in parts of East and Southern Africa.  The Great Elephant Census revealed in 2017 that there has been a 30% decline in elephants across Africa between 2007 and 2014.  The current rate of poaching revealed by the Great Elephant Census is unsustainable at 8%, higher than the natural rate of increase of African elephant populations.  Mozambique and Tanzania lost approximately half of their elephants between 2010 and 2015, a devastating loss for these countries fuelled by demand for ivory.
There are thought to be about 400,000 elephants in Africa overall, with the vast majority (more than half) occurring in southern Africa, and the largest country population in Botswana (approx. 130,000, and relatively stable in the last decade). The IUCN Red List considers African elephants to be Near Threatened, however poaching records suggest Africa may be losing 30,000 or more elephants a year to poachers. Poachers kill elephants with poisoned spears, bows and arrows and automatic weapons. Why? For their ivory. Poachers in Africa make a small fortune when they hand ivory over to criminal middlemen for sale in Asia. The answer is to stop the demand.

Where is the Ivory Going? 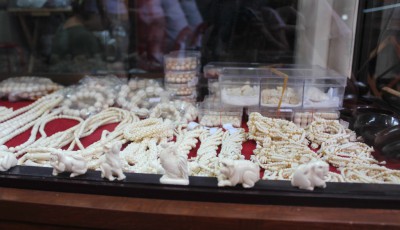 Ivory on sale a few months ago in Bangkok's Chatuchak tourist market (T. Matson)
It used to be that Europe, the United States and Japan were the main buyers driving the demand for ivory.  That was in the 1980s when it was estimated that 100,000 per year were being killed (read more here), but the international ban and some very effective consumer awareness campaigns reduced these markets to a mere trickle.  Now most of the ivory from poached African elephants goes to China and the USA, and a lot via smuggling routes across south-east Asian transit countries (some of which are also consumers of ivory) like Thailand, Malaysia, the Philippines, Singapore, Vietnam, Indonesia and Laos.  TRAFFIC estimates that the illegal ivory trade is now triple what it was ten years ago (read more here).  Ivory is carved into amulets, artworks, jewellery and cigarette lighters, among other things.  When you visit any Asian countries, don't buy ivory of any kind - it may have come from illegally killed African elephants.

Has Any Progress Been Made?

Yes!  Our Let Elephants Be Elephants campaign and related National Geographic documentary was one of several awareness campaigns focused on Asian countries to stop people buying ivory.  The combination of educational campaigns in the buyer countries as well as policy decisions at the very top level in the USA and China to stop their domestic ivory trades has made a big difference.  The price of ivory has dropped in the last 3 years to a third of what it was at the peak of the poaching.  Read more here.  It remains to be seen as to whether we will see improvements in the population trends of African elephants when the next census is undertaken.  The fact that Africa’s human population is set to double by 2050, combined with the effects of climate change which will make Africa dryer and hotter, will all put more pressure on Africa’s elephants in the future.

What About Asian Elephants?

The Asian elephant is listed as Endangered, with only about 35,000 left.  Most of the Asian elephant population occurs in India (approx 25,000), with much smaller populations in other parts of Asia, including Indonesia, Sri Lanka, Myanmar, Thailand, Malaysia, Cambodia and Laos.  Due to major threats like human-elephant conflict, loss of habitat and poaching, the Asian elephant population is stable or declining (read more here).  The big issue for Asian elephants is human-elephant conflict because of the very high human populations in Asia.  I've got a soft spot for Borneo's pygmy elephants, because there are only a couple of thousand left and they live in a sea of palm oil plantations (read my blog on this here

What is human-elephant conflict (HEC)? 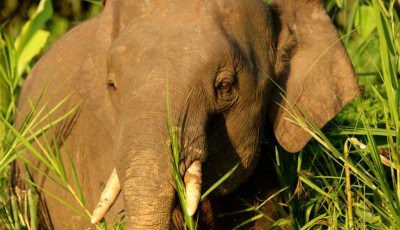 Pygmy elephant, Borneo (T.Matson)
HEC is the official term for what happens when wild elephants clash with people. Conflict usually occurs at night and typically takes the form of damage to crops, water installations (e.g. solar panels, generators, pipes), and injury or losses of both human and elephant life. In India, elephants are killed through poisoning, electrocution and train accidents.

Why does it happen?

Most agree that the root cause of human-elephant conflict is increasing human populations and the subsequent encroachment on elephant habitats.  In the north-east state of Assam, India, 65% of the lowland forests have been destroyed in the last 30 years, for commercial logging, tea plantations and now subsistence farming.  Former elephant habitats have become human territory.  In Africa, in the last 25 years, the human population doubled (UNEP 2006).  The more space we take up, the less there is for elephants.

Where does it happen?

People and elephants directly compete for the same resources - land, water and food. As a result, HEC occurs all over Africa and Asia where wild elephants roam and people live. In India HEC takes on average 400 human lives every year and 100 elephants (even more than poaching). In Africa, the number of lives lost, both human and elephant, across the continent, is probably in the thousands annually.

What can be done to reduce the problem? A lot of different techniques have been tried to keep elephants out of people's crops, such as electric fences, trip alarms, drums and loud noises, fire crackers and shooting guns. Use of distressed elephants' ultrasound has even been tried to try and ward elephants off crops. People will do anything to protect their crops because they are often all they have to survive on. But elephants often become habituated to these deterrents.

In Africa, the Elephant Pepper Development Trust has shown some success using chillies to deter elephants. Elephants don't like the smell of chilli and will stay away from crops that have it. A simple mixture of elephant dung and chilli, dried into a briquette, with a hot coal on top, releases a chilli-smoke, that when placed around crops, can keep elephants away. Chilli fences, which are simple rope fences with chilli and oil doused cloths strung along them, also appear to work. Many of the farmers combine these chilli-based deterrents with growing chilli in and around their maize (corn) crops, which not only serves as a buffer to elephants (because elephants won't eat the chilli), but also gives them a cash crop that they can sell. Chilli is a high net worth crop that brings in a lot more cash than crops like maize and sorghum. Similar trials of chillies to deter elephants are now being trialed in India

Mitigation measures might help reduce the conflict, but it doesn't really solve the problem, does it? That's true. The root cause of HEC is the loss of elephant habitat. Elephants will continue to come into areas where people farm if that is where they roamed previously and there is food available for them there in the form of crops. Elephants love maize, sorghum and rice paddy! In Africa, transfrontier conservation areas (TFCAs) or 'peace parks' are being developed that connect elephant habitat across large corridors and migration zones. These TFCAs cross country borders, just as elephants do, and within them, people can benefit economically from the presence of elephants through tourism and other income sources.

How long do elephants live?

African elephants live up to 65 years in the wild.

How much do they eat and drink?

African elephants can consume up to 5% of their body weight in a day (up to 300kg) and drink over 200 L of water per day!

How big are they?

Adult male African elephants weigh up to 7.5 tonnes and measure 4 metres at the shoulder.  Asian elephants are smaller: adult males weigh about 5 tonnes.

Only in West Africa.